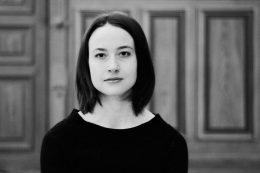 Shannon Sullivan is a poet and multidisciplinary performance artist.

She received her classical dance training at several renowned schools in the USA: Joffrey Ballet School, Boston Ballet School and North Carolina School of the Arts, among others. In addition, she completed her training as a professional actor at the American Musical and Dramatic Academy and worked for several years as a freelance performer in New York. In 2004 she moved to Berlin to focus on creating her own pieces.

Shannon offers a newsletter to keep you up to date, and is also on Facebook and Soundcloud.

... will let you know about upcoming performances, new songs and texts, ...
You can subscribe to it here. Welcome!
Shannon Sullivan
Go to Top